If an Employer breaches an employment contract can its restrictions be enforced? 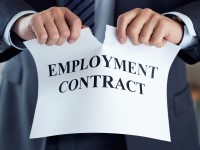 Employment contracts often contain restraint of trade clauses seeking to restrict
employees from engaging in certain conduct that may adversely affect the business.

Although restraint provisions apply during and after the employment relationship,
they are most frequently tested once an employee leaves to work for a competitor or
to embark on his or her own similar enterprise.

A successful challenge to a restraint clause can leave an employer vulnerable to its
competitors.

The efficacy of such clauses may be upset when one party fails to uphold its
obligations under the employment agreement. Such was the case in Crowe Horwath
(Aust) Pty Ltd v Loone [2017] VSC 163.

Over the ensuing years, Mr Loone established sound relationships with the firm’s
clients.

In January 2015, Horwath was acquired by Findex Group Ltd. The acquisition
brought about several changes and restructuring through its Family Office Initiative
and Mr Loone’s previous management responsibilities and autonomy were
substantially curtailed.

In June 2016, a new bonus incentive model was introduced resulting in 20% of
annual bonus payments being deferred for three years rather than paid annually
(with the remaining 80%). Under the new direction, it was decided to exclude from
the Launceston ‘staff bonus pool’ net profits of $440,000 which were attributable to
Mr Loone’s efforts and involvement in acquiring another accounting firm. This
consequently reduced the bonus for which Mr Loone would be eligible to receive.
Disenchanted, Mr Loone resigned in July 2016, refusing to work out any notice
period on the basis that Horwath had repudiated the employment contract.

Horwath sought a temporary injunction in the Supreme Court invoking the restraint
provisions in the employment contract. An injunction restraining Mr Loone from
offering accounting services to 89 of Horwath’s clients was granted in September
2016.

In April 2017, the Court discharged the injunction previously imposed, deeming
Horwath’s actions ‘repudiatory conduct’ and Mr Loone’s termination of the contract
valid, by his acceptance of the repudiation. Consequently, the Court determined the
post-employment restraints in the contract ineffective.

Horwath’s appeal of this decision was unsuccessful, the Court affirming that:

• The change of duties introduced after Horwath’s acquisition by Findex were
significant resulting in Mr Loone’s new position no longer reflecting the role of
Managing Principal as provided in his employment contract.

The position description tendered in evidence stated that Mr Loone’s position
would entail a ‘critical senior leadership role within the business…shaping and
delivering the strategic direction of the business…providing clear leadership
[and] responsible for generating growth in revenue and client base and
building strong client relationships’.

• The new bonus system which introduced a deferred payment scheme
breached the employment contract which, upon its proper construction,
provided for annual payments.

• By excluding the major acquisition from Mr Loone’s bonus calculations,
Horwath breached the employment agreement by failing to properly assess
the bonus entitlement in accordance with the prescribed criteria. In particular,
clause 7.5 provided that bonus payments ‘…will be determined by
consideration of various performance parameters including but not limited
to…personal performance…’

• Horwath could not enforce the post-employment restraint provisions in Mr
Loone’s contract because of its repudiatory conduct. Whilst the restraint
provisions per se were generally enforceable, the termination of the contract
by Mr Loone meant that the restraints had no legal effect. In this regard, the
Court could find no other relevant precedent to refute this proposition.

The general law provides that a breach of a contractual condition by one party, will
give the other party a right to repudiate (reject) the contract and sue for damages.
Horwath’s conduct was deemed repudiatory and Mr Loone’s acceptance of the
repudiatory conduct entitled him to terminate the contract.

In this case, Horwath paid a considerable price for its conduct. Mr Loone was
awarded over $420,000 reflective of his salary for 12 months, together with $142,000
representing his full bonus entitlement for the prior year.

• Employment contracts and restraint provisions should be drafted carefully,
and employers must act cautiously when introducing change that substantially
alters the terms of the employment arrangement.

• An employer’s conduct will likely be taken into consideration when relying on
restraint provisions. Unilateral changes to employment arrangements at the
discretion of the employer and which breach contractual obligations may
constitute repudiation of the contract and render any restraint clause
unenforceable. The exiting employee may not be restrained from taking an
immediate position with a rival company.

Employers seeking to restructure operations and introduce significant change in the
workplace should seek legal advice before doing so. Certain actions may be deemed
repudiatory of the employment contract leaving the employer at risk and unable to
rely on restraint provisions.

We are able to review, draft and advise on employment contracts and their
enforceability generally. If your business needs assistance please contact us on
(03) 9600 0162 or email info@lordlaw.com.au.